Chunks of ice and snow dislodge from the roof of a fast-moving truck or bus and land squarely on the windshield of a passing motorist’s car.

In a split second, the motorist is startled, his/her sight is blocked. What happens next is unpredictable and possibly tragic.

A cracked or broken windshield. A crash. Injury or death to a motorist or passenger. Each is a potentially devastating outcome.

“Snow laws vary widely by state and province, and they affect all drivers on the road, not just the drivers licensed in the state that has regulation.”

Trucks drive by and get passed by hundreds or thousands of other vehicles and pedestrians every day. Regardless of how often it snows, each winter storm brings innumerable complicated situations for fleet drivers and motorists. The risks and liabilities of not removing snow from roof tops of truck and trailer fleets are costly and possibly life threatening.

Snow laws vary widely by state and province, and they affect all drivers on the road, not just the drivers licensed in the state that has regulation. Whether your fleet is driving to, through, or from snowy areas, fleet managers and drivers need to know the laws in their geographical footprint to safely keep their trucks and buses on the road after a snowstorm. Keep abreast of legislation in the states and provinces covered by your incoming and outgoing vehicles to avoid delays and violations, and meet your customer demands. 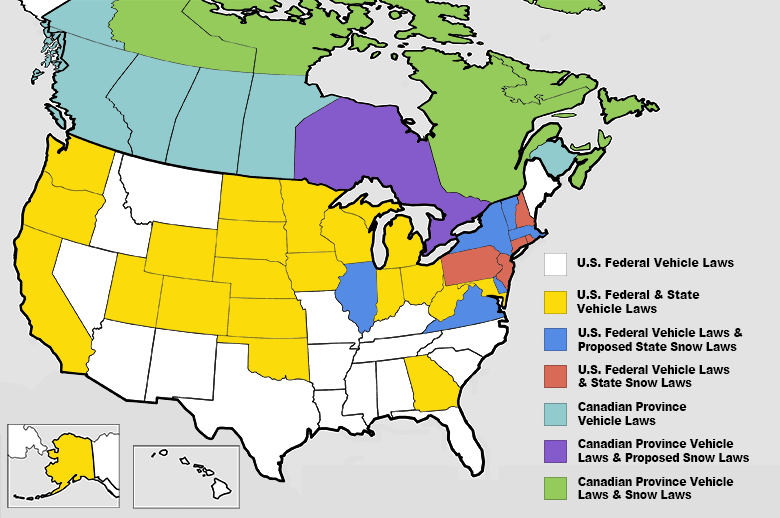 In 2016, the American Trucking Association (ATA) published a summary of the snow removal laws in place at that time, categorized by U.S. state. We’ve been following this series of legislations, making updates to the ATA’s initial findings, and adding new entries as US states and Canadian provinces discuss potential regulations and bring them to vote.

The public sector weighs in

Governments and municipalities across North America are discussing laws and legislation to improve road safety and enforce clearing snow off trailers, trucks and buses.

What laws impact rooftop snow removal for commercial carriers, transit vehicles and buses on our roadways? And what do they mean for fleet managers?

We took a look at snow laws in U.S. states and Canadian provinces to capture a snapshot of legislation governing snow removal from commercial and municipal vehicles on roadways. Here are some observations and their impact for winter fleet management.

2. Well-established snow laws for commercial vehicles are already in place.

“These areas have well-established snow removal legislation and set the stage for more states and provinces to follow.”

3. Pending legislation in states across the country continues to be introduced and brought to vote.

4. Even if states and provinces have no specific regulations that address clearing rooftop snow, it doesn’t mean fleet operators can ignore the responsibility. Federal laws in the U.S. and provincial laws in Canada prohibit unsecured and overweight loads that impact commercial vehicles. Some U.S. states add stricter laws to govern load security and weight.

The bottom line for fleet managers

Fleet managers and facility operators should be aware of legislation in their state and enact processes that keep their company and drivers compliant. Stay up to date by contacting your local and state/provincial and federal government offices for the most recent information.

Keep up to date